There are many resources ([1], [2], [3]) explaining how to use Vault, but none of them goes into the details of setting it up, especially alongise Consul and docker-compose.

I’m not going into the details of Vault and Consul in this blog post, but, for anyone not familiar with the concepts, let’s just say they are open source tools created by Hashicorp for managing secrets, and for simplifying service discovery, respectively.

The complete setup described in this blog post can be found on Github: https://github.com/marco-lancini/docker_vault.

As a security professional, I often find myself performing assessments of different systems, regardless if they are web/mobile applications, or entire infrastructures. Working in a team, one of the issues we often face is how to share credentials securely among the team members. Credentials managers like KeePass are awesome, but they haven’t been designed for collaboration, and those databases are painful to share and keep up-to-date between all the team members.

That’s where Consul comes handy: ideally we would like to quickly spin up a new instance for every assessment, so to handle password management across the team.

Here is the idea:

After a couple of afternoons spent delving into the documentation of the different services, I came up with the following setup:

Now that we have everything ready, let’s start by bootstrapping our setup with docker-compose up:

The 4 services are up and running, but we still need to initialize and unseal our vault. I scripted this in the setup.sh file, which will:

After running this script we should have your vault unsealed, a set of credentials (“webui/webui”) that can be used to login in the webui, and an authentication token to be used by the backup service.

Once done, we can use docker-compose down to stop the services, while all our secrets will be stored in the _data/consul folder:

Next time docker-compose is started, we will only have to unseal the vault, with the unseal.sh script:

We could stop here and manage our secrets via the command line, or we could streamline the process a little bit more. Just open a browser and point it to http://127.0.0.1:8000. You should be presented with a login page. Insert the credentials and you’ll be able to manage your vault through a convenient web interface. 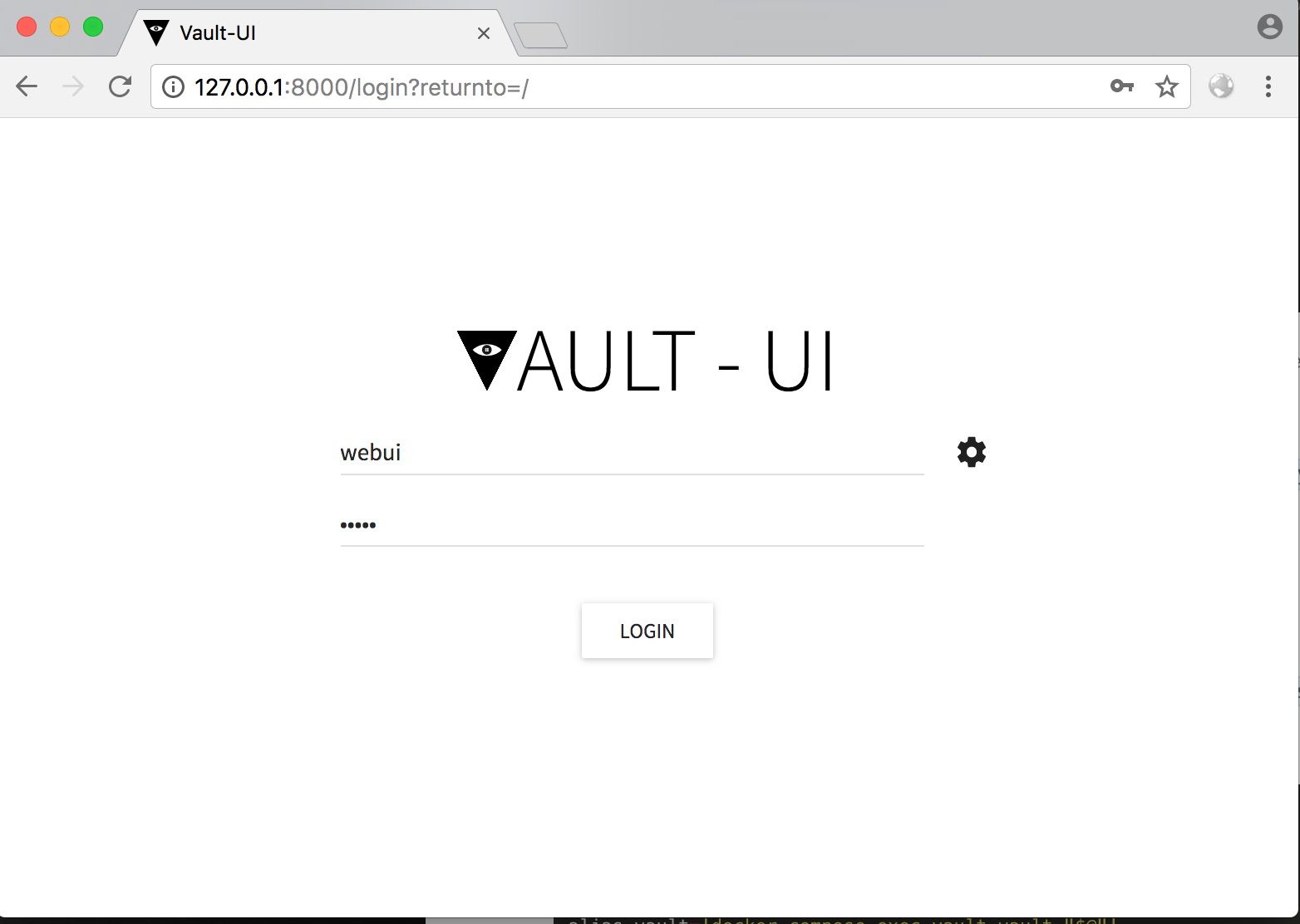 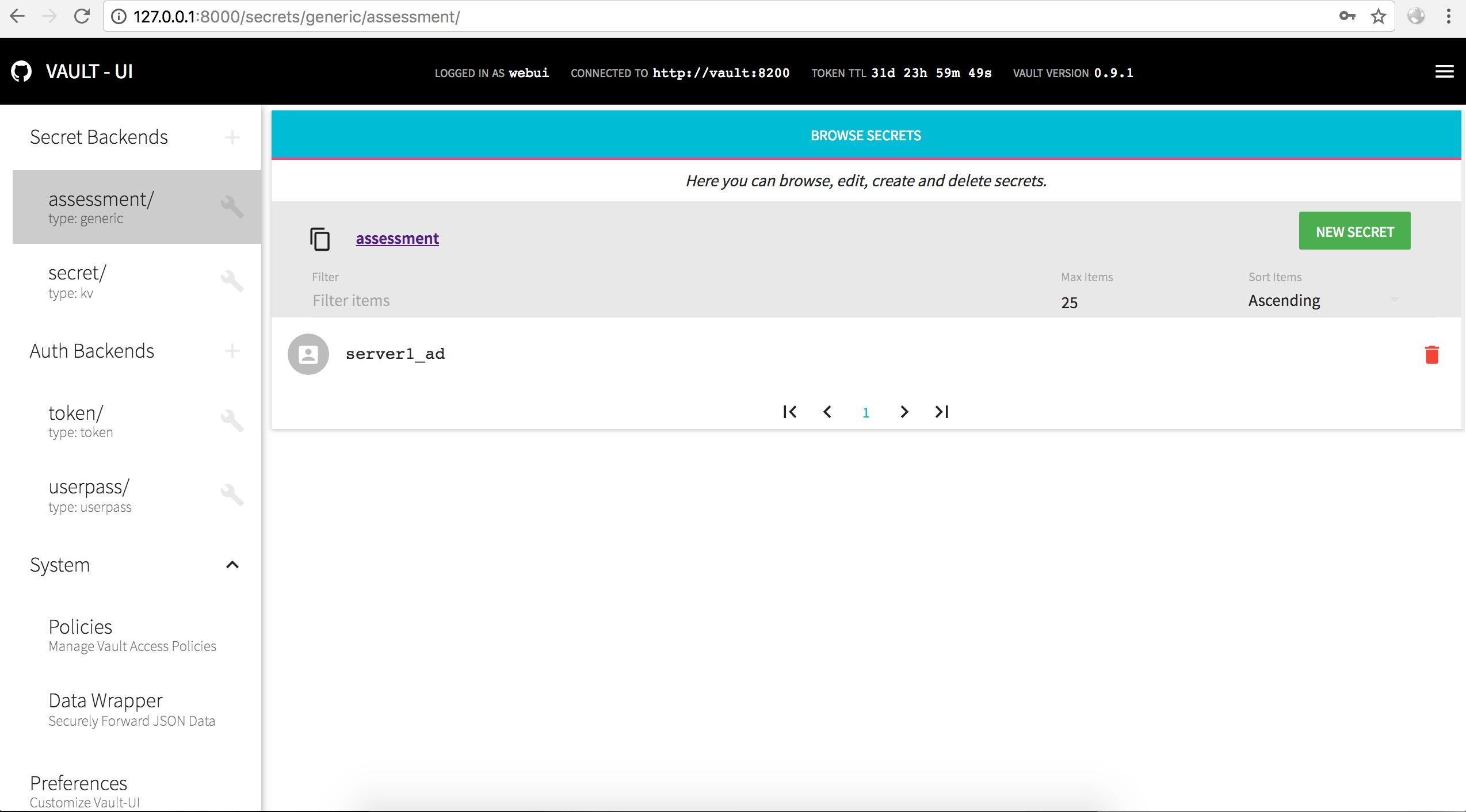 At the end of the engagement, we might want to backup our secrets, and remove any leftovers file.

The backup service, based on the consul-backup script, will store the backup on the volume we specified in the docker-compose.yml file (_data/backup in this case).

Finally, the clean.sh script can be used to remove any data stored by the scripts or Consul in the _data folder (remember to move any backup file first!)

The setup described in this blog post should be enough to bring anyone up and running with Vault, but it could still be improved.

For example, I have disabled TLS. To re-enable it, just put the server’s certificate in the config folder and uncomment the relevant lines already put in the config\vault.hcl configuration file.

The complete setup described in this blog post can be found on Github: https://github.com/marco-lancini/docker_vault.

If you found this article interesting, you can join thousands of security professionals getting curated security-related news focused on the cloud native landscape by subscribing to CloudSecList.com.

Burp Pro as a Docker Container

Needle meets Jenkins: how to include Needle in your CI pipeline

Buy me a coffee

What to look for when reviewing a company's infrastructure

On Establishing a Cloud Security Program

Mapping Moving Clouds: How to stay on top of your ephemeral environments with Cartography

So I Heard You Want to Learn Kubernetes

What to look for when reviewing a company's infrastructure

Docker on MacOS via minikube (2022 edition)